We are so thrilled and grateful to Engineering News-Record for featuring FieldLens as an up-and-coming construction industry tech tool! Full coverage below:

By Tom Sawyer and Luke Abaffy 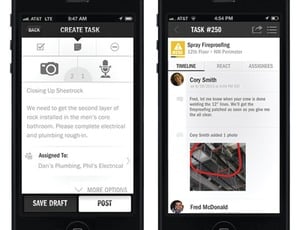 The most important elements of social networking sites are their ability to share media, post comments and store all that data and more as a permanent web record. The same can be said for web tools that manage a construction site. The new web application FieldLens aims to become the Facebook of project management services.

“I tried using Facebook on a project two years ago,” says Todd Wynne, Rogers-O’Brien Construction, Dallas. “But it failed.” Wynne beta-tested FieldLens and says it hit all his project needs. “Communication is what has been missing in our industry,” says Wynne. At the same time, people are communicating too much with “email, text, screaming and yelling,” he adds. FieldLens positions itself as a centralized medium for project communication.

Users can use the platform to upload photos, audio, video and text about a project, comment on it and post it in a news feed similar to Facebook’s “Timeline” feature. Workers receive emails when posts are relevant to their settings on the platform. For example, when a steel shipment arrives, a worker can take a picture, post a comment and alert everyone who needs to know, says Wynne.

Doug Chambers, CEO of FieldLens, worked as a project manager on several high-profile projects, including the World Trade Center rebuild. “Every day was like Groundhog Day,” says Chambers, meaning that, no matter the jobsite, he saw the same issue day after day: communication breakdowns.

Chambers jumped from construction into tech, raising over $1 million in startup funding and forming an Ocean’s 11-worthy team of construction consultants and programmers. Feedback from beta testers has been positive.

“I couldn’t imagine going back to the processes we had before FieldLens,” says William Meng, field operations manager, Crescent Construction Services, Salisbury, N.C., a beta tester who says his company went from using a “mess of paperwork, Dropbox, Photoshop and a million emails” to having “total project management in one place with one tool.”

Chambers says users can sign up at fieldlens.com. Until the end of the year, the service is free for approved beta testers. The paid version of FieldLens launches in early 2014 and will cost $15 per user, per month, for an unlimited number of projects, says Chambers.

U.S. hoteliers are expected to spend a record $6.4 billion on capital expenditures, which includes hotel renovations, in 2015, a 7% increase over 2014. When renovating

Good news for users of the FieldLens iOS and Android apps: This morning we released new versions of the mobile apps with some nice enhancements