It’s easy to get stuck in our own silos when working on a construction project.

The architect, engineers, and project managers all tend to focus on their own parts of the job, which can lead to problems when coordinating all the different aspects of the build. Add to that the problem that arises from everyone in the construction industry adopting technology at different rates and with different applications. This can result in software incompatibility between different teams on a project, causing delays and other issues.

As construction teams embrace better and more open collaboration models, they need to also work out these interoperability issues to ensure a seamless transfer of information. This will, in turn, reduce communication issues and friction on jobsites.

“Interoperability” refers to the ease with which data can be transferred between various software programs and teams on a project. This ease of data movement helps you more efficiently complete your project, since you won’t have to spend time converting files into compatible formats.

Why Is Interoperability Important?

According to a 2004 study by the National Institute of Standards and Technology, interoperability problems cost the capital facilities industry (including power plants, commercial buildings, construction, and other sectors) $15.8 billion annually.

While that number has gotten better in the intervening years, thanks to new and better software, transferring data between different teams is still a major issue for many companies. As of 2007, build teams estimated that interoperability problems still contributed an average of 3.1% cost to a building project (according to the McGraw Hill Construction Interoperability SmartMarket Report).

Being able to easily share data between different members and teams on a construction project has several advantages.

First, you don’t have to waste time retyping information in multiple systems — and you won’t have to rely on pushing paper with your co-workers anymore. This can speed up your overall project completion, and give you more reliable information as the project moves along. You’ll also be able to reduce what you’re spending on communication, which will allow you to provide a much better value to your customers.

How Do We Get There?

In order to improve interoperability on your own projects, you need to take an approach that involves both people and technology in the solution.

You can accomplish this by creating an integrated project delivery model, in which different teams collaborate from the beginning of a project. Openly sharing information will also make your software solution(s) more effective.

Being able to share information across different teams on a construction project is critical to improving productivity and decreasing costs. By combining software solutions with education and encouragement of collaboration between team members, you can create a much more efficient building process. 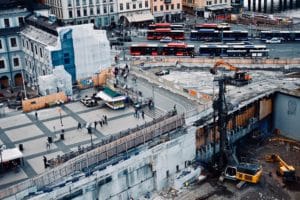 The Secret To Marketing Your Construction Company

You’re already doing it. Your company is live with a project management software program, and results are rolling in: Work is happening faster, tracking progress

Why It’s Actually Safer To Ditch The Paper Trail

I’ve mentioned before that I grew up in a construction family. With my grandfather, father, brother and various uncles owning construction companies I know (as